We did a 6-day road trip to Texas last week. The excuse was to visit an old friend, but really it was to get away for a few days after spending the past three or four months recuperating at home. Except for occasional stiffness and a bit of soreness, Kathy's knee is as good as ever. We're both pleased with the result. Given the price of gas, we decided to take the Prius instead of the truck and fifthwheel. Staying in strange motels and eating in unknown restaurants is a real downer, but we wanted to compare the two methods of traveling. It's a wash. The Prius averaged 48 miles per gallon, about 4 times that of our truck; however, the money we saved on fuel was eaten up by the higher cost of motels compared to RV parking. I guess the real difference was travel-time. When I pull the trailer with the truck, I travel at 55 mph; in the Prius, I drove 70 mph, a large difference considering we traveled 1800 miles. Actually, it's more fun to drive 55. I see more country that way.

We stayed off the major highways, preferring to visit small towns and avoid large cities. Wichita Falls was the largest city we drove through. It was Kathy's first visit to Larry McMurtry's mega used-book store in Archer City. We each bought a book. Mine was The Beginning of the West, 1540-1854 by Louise Barry, abstracts of journeys made by the early explorers to the southern midwest. Kathy chose a mystery to read during the trip. We ate open-pit BBQ at the two top-rated restaurants in Texas: The Hard Eight in Stephenville and Coopers in Mason. Of the two, we preferred Coopers. I'm not sure how many little antique stores we stopped at. A bunch. The store I enjoyed most was an everything store called Evridges in Mason. It stretched across one whole side of the town square. They displayed a high-dollar black modern cookstove designed to look like an antique wood stove. For many dollars more, one could take home a matching black refrigerator. Selected trip pictures:

As always, you can click the photos to get a larger view.

Kathy and I really enjoyed the visit with my old buddy. He and his wife live in Floresville, TX. I last saw him over 40 years ago when he left the 'ice' on a plane. I left a couple of months later. He hadn't changed much, just gotten a bit older. We were part of the 'winter-over' contingent in Antarctica that year. 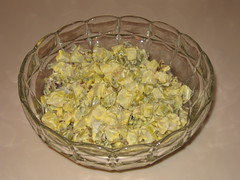 I don't always make hash out of left over baked potatoes. This is a picture of my Baked Potato Salad. It's quick and easy, baked potato, kosher dill pickle, a bit of onion, white or green, all chopped, mixed with a heaping tablespoon of Miracle Whip Salad Dressing and a bit of yellow mustard. Since I have a slight fresh-onion allergy and I'd already met my quota for the month, this time I used onion powder instead. After mixing, let set for a couple of hours to meld.
Collapse