May has been a busy month...

I found the hidden safety switch, adjusted it, and fixed my mower. After I received the manual-on-cd in the mail, I was able to locate the switch. Couldn't see it though. I had to remove the rider deck first. After going to the trouble of removing the deck so I could see the switch, I realized that if I'd just hoisted the mower in the air, I could have adjusted the switch from underneath. I don't have a trusty hoist, plus I don't like getting underneath machinery, so I probably would have removed the deck anyway. 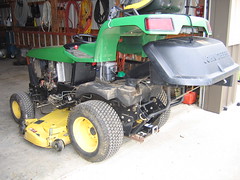 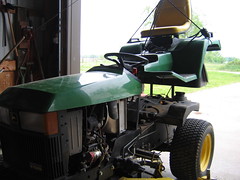 While waiting for the manual, I trimmed trees and bushes, mostly to get rid of the damage caused by last winter's ice storm. That resulted in three trailer loads of limbs to be hauled away. I'm not completely done with the chore. I still have five redbuds trees and all the pines to go. I'll do that later. Moral: don't plant so many damn trees! That said, I ordered six bare-root hazelnut trees this spring. I have four in pots and gave two away. I'll plant the survivors next fall.

The grass (weeds?) were so high I had to mow them twice. I have weeds in parenthesis because the biggest grower at this time of the year is fescue, a pasture grass, not the bermuda I call grass. Fescue is one of those mistakes made by the Department of Agriculture. Fescue was encouraged as a spring-growing pasture grass that was rich in protein. All the ranchers planted it. Then they learned that, in a wet spring, fescue is the perfect host for a fungus that can make cattle very sick. By the time they learned that, fescue had seeded the entire area. 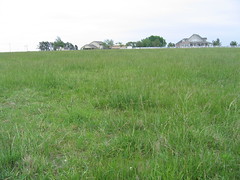 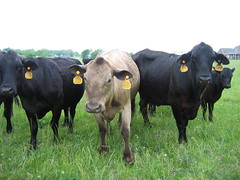 Fortunately, it becomes dormant in the summer heat that bermuda grass likes so well. Actually, in the spring along with the fescue, my yard grows a lot of white dutch clover. Its flowers are a good source of nectar for the honey bees, although there aren't many of those (honey bees) now. I've been thinking of finding someone to locate a few hives in the corner of my yard. We need the pollinators.

In an earlier entry, I said I'd finished the black metal fence around the pool. I didn't say the pool was completely enclosed. We decided to make the back porch part of the pool area and to enclose that part with rough cedar railing like we have on the balcony upstairs. Eventually, we'll have railing on all the porches. That's part of the grand plan. I've spent several mornings priming and painting the 312 feet of rough cedar 2x4s it will take to do the back porch railing. I have 80 feet to paint. Then I cut, assemble, and install the railings.

The 12 blueberry bushes I planted last spring are doing well and are bearing some fruit this year. Kathy's keeping the berries from getting overripe and dropping off. She has even shared a few with me. I have the metal strips to edge the bed, but before I can install them, I have to install two french drains. It has been too wet to do that. I have the ditches dug for the pipe, but they keep filling full of rainwater. Which I promptly pump out.

I said goodbye to an old friend this month. I hauled the remains down to the creek, placing them in a wash. 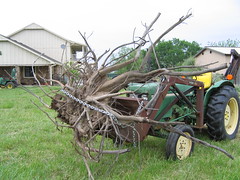 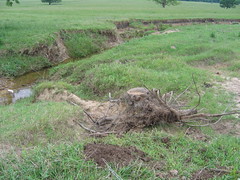 The 30-plus-year-old crabapple tree I'd raised from a seed, carefully transplanting it from house to house fell victim to a hard west wind last fall. I'd already hauled away most of it, but thought I'd let the dirt wash from the roots of the stump so it would be easier to move.

Under duress, I've opened the pool. I wanted to get more things done before I was saddled with pool maintenance. Supposedly, I'll be getting help this year. School is out and we have bored rug-rats around who think it's pool time.

Kathy has started a refinishing project. We have this old-time drugstore display case. It's huge, eight feet long, eight feet tall, two long sliding glazed doors below, a row of drawers under a ledge, and topped with a thinner upper cabinet also with large sliding glazed doors. It's not really an antique, more of a keepsake, and in sad need of refinishing. The case is about 100 years old, was in a drug store in Fort Gibson, OK for years, and then bought by Kathy's grandmother about 60 years ago, so she could display her collection of cookie jars. It's been in our garage over ten years. We included it in our house design thirty years ago, except I failed to allow for the half-inch thick tile we have on the floor. So either I chip out the tile (not likely), notch a beam (not likely), or trim a half inch or so off the crown molding on the cabinet top (likely). We're spending mornings together in the garage. She refinishes cabinet while I finish rough cedar.

I spend some time each day on short story critiques for others and revising my critiqued stories. I can see where the process is helping my writing. I ran into technical problems with my new story, so I've put it on hold for now. The problem with doing Science Fiction is one needs to have the science correct or at least plausible. Although the grand plan is a historical novel, I like short stories while I learn the art because the feedback is quicker.

We made a Memorial weekend trip to western OK to put plastic flowers on graves and to attend the yearly get-together. I snapped a bunch of family pictures and these two on the way back. The western OK canyons are deep and full of vegetation. The house had seen better days and, I'm sure, the laughter and tears of older generations. 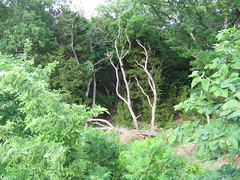 Here are some food pictures: Kathy made Chinese stir fry while I cooked fried rice. Leftovers became soup the next day. The last one is a chicken dish.