I think I mentioned this last summer. Not sure. If so, here it is again. We have three rows of pine trees that we planted as seedlings several decades ago. Almost from the gitgo, they've been infested with pine tip moths (I blame a nearby and now defunct Christmas tree farm). The moths lay eggs in the new growth each year and the larvae eat their way out. While this doesn't kill the tree, it destroys the new growth and makes the trees ugly and stunted.  I should spray several times each summer with some really bad systemic stuff to control the infestation. I don't like to spray, so sometimes I don't and sometimes I procrastinate until after the damage is done. The trees are large enough now that the spray doesn't reach the top. The process is a big pain in the butt.

Several years ago, I had a great idea (IMO). Since my problem is a moth, and we know moths are attracted to lights, maybe they could be controlled with bug zappers. I wanted to give it a try, but the pines are far enough from the house that providing electrical power for the bug zappers would be a hassle. Last summer I saw an advertisement for solar-powered bug zappers. I ordered four. I didn't received them last summer; they were back-ordered. Six months later, in the middle of the winter, weeks after I'd given up ever receiving them and had forgotten about them, they arrived.

I 've installed them. They look like normal solar-powered garden lights except around the light is a coil of wire. The light, an led, is blue, biased toward the ultra-violet, I suppose. The zappers appear to be working. I watch from a distance, and every so often, the blue light flickers and dims like the proverbial light at an execution.
Edit 25may2009 to add picture: 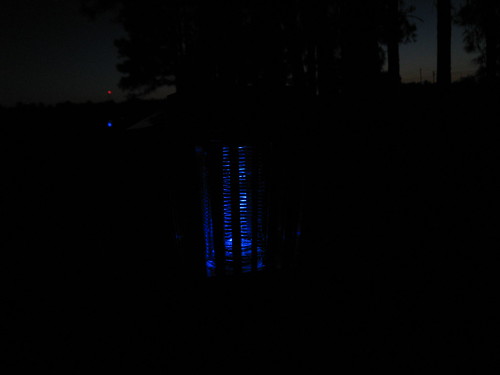