The day started early, before light, with food preparation and ended late, after dark, with dessert-seeking folk who had eaten dinner elsewhere. It was the usual crowd, a couple of dozen or so, with some exceptions: Kathy's aunt, still in the hospital from a knee replacement on Thanksgiving Eve,

What am I thankful for this year? All the usual stuff: good health, good luck, and good friends. Oh yes, and the tripling of the IQ at the White House.

GCT Day 10: We traveled from Trinidad, CO to Woodward, OK by way of Raton and Clayton, NM. The road near Clayton parallels a railroad track. As we were traveling east, we met a complete train of desert-tan army tanks going west.

On the outskirts of Clayton, we drove by a yard of sheet-iron sculptures. We stopped for a few pictures. 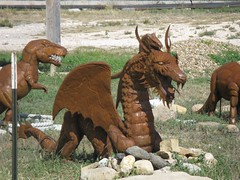 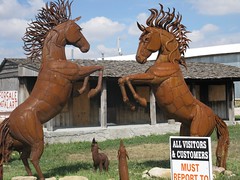 Shortly after leaving Clayton, we entered the panhandle of Oklahoma. I looked at the expanse of grassland and remarked to Kathy, "You know, I used to think this country was dry." We agreed that the countryside was lush compared to northern AZ.

My brother lives in the panhandle, and he was home so we detoured his way for a visit. He gave me a ride in his newly restored 1929 Chevy touring car. Bill is a master craftsman. The car restoration has been a decade-long hobby interspersed among all his other interests. 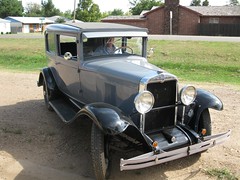 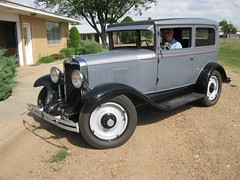 No trip through the Oklahoma panhandle is complete without grain elevators, pig farms, and bashful sunflowers.

GCT Day 11: In Woodward, we visited one of my cousins and some old friends.

GCT Day 12: Home again. It had rained seven inches while we were gone, unusual for this time of the year. The yard was overgrown, and my tomato vines wilted. Our dogs seemed glad to see us. 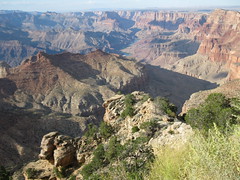 Layered ramparts dozing in the sun,
Stark remains of geologic past,
Give multicolored testimony
To a river's will to cut and run.
Collapse