We've picked tomatoes since the first of June, a month earlier than the norm of just a few years ago. Perhaps we're seeing a new norm emerging, or perhaps there won't be a norm anymore.

My brother from Kansas stopped by for a brief visit and left with our entire stash of vine-ripened tomatoes except for a couple of dozen small ones that I later turned into spaghetti sauce. What you see in the picture are the tomatoes I harvested yesterday. The dark colored ones are a heirloom variety called Cherokee Purple that I planted for Kathy. Personally, I feel that a tomato ain't a tomato unless it's red. 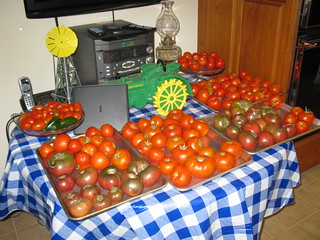 Kathy liked my Mexican Spaghetti Sauce and wanted the recipe. I'd bought four poblano peppers at Saturday's local farmer's market along with some pickling cucumbers. I sauted half a chopped onion in canola oil while I roasted the peppers and four cloves of garlic. I removed the skins, chopped, and added them to the onions along with a teaspoon of salt. Next three teaspoons of chili powder and one of oregano went into the pot. After stiring and allowing the spices to bloom, I added a cup of water, a small can of tomato sauce, and the two dozen small tomatoes sans their skins which I'd removed earlier. When the tomatoes became soft, I crushed them. Then I added a big handful of chopped cilantro, covered the pot, and simmered the mess until it was the right thickness. Today, I added a sauted and sliced chicken breast to the sauce and served it over linguine.

What? Oh, the cucumbers. We ate them on Saturday. Chopped cucumbers and chopped plum tomatoes with two roasted and minced garlic cloves, one thin-sliced Jalapeno pepper, seeds and all, a dozen thin slices of onion, salt and pepper plus a tablespoon of canola oil and a splash or two of red-wine vinegar. Chill for a while.

Actually, the real reason that I'm posting this afternon is I'm hiding from yard work. That hasn't been going well for me.

Last night, I noticed that the pool pump was leaking. There are two freeze plugs that sometimes leak, so my first impulse was to tighten them. The first was a little loose and I tightened it. A quick turn on the second plug was all it took to break the plastic end off. Fortunately, it was on the suction side of the pump, so it didn't leak water. It did suck air. For a bubblegum-esque temporary fix, I dobbed on a lump of plumber's putty. It worked. Next week, I'll have to drill out the plug remnant and buy a new one from the pool place. And yes, I still have a leaking pool pump.

Last week, I'd removed and power-washed my mover deck in preparation for sharpening the blades. Yesterday, I borrowed my brother-in-law's air-driven impact socket-wrench to remove the bolts that attach the blades to the mower deck. The first two bolts came out easy, but the last one was tough. I tried about everything. Finally I gave up.

This morning I decided to try everything once more and managed to ruin the bolt. Instead of having a hexagonal top, it now has a more-or-less round one.
Collapse