We saw no bald eagles soaring over the lake during our yearly winter pilgrimage. The lake level was low due to an abnormally dry winter, so no excess water flowed through the dam and no stunned fish floated belly up for the birds to scavenge. In the park below the dam, a single immature bald eagle roosted in a tree. It was the only one we saw. We did see numerous other birds: pelicans, vultures, geese, and all kinds of seabirds. This was our first year to notice pelicans at the lake. 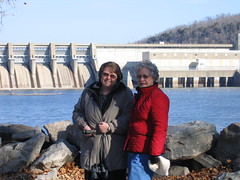 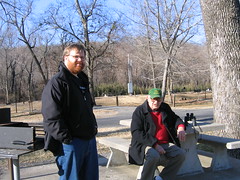 From the lake, the river runs through a narrow and picturesque valley for about ten miles

down to Fort Gibson where we like to lunch on Polish food. But alas, the restaurant was closed. We drove on to Muskogee and ate Italian food instead. We had fun.

lo5an suggested I document my disassembled Toshiba laptop. I fixed the power plug connection by re-soldering it to the board. For $60, I acquired a replacement touchpad assembly from Impact Computers. It's in the ziplock bag, lower left. I reassembled the laptop. I must have guessed wrong on at least one screw because I ended with one that was too short for the last location. Oh well, that's better than I usually do. Kathy suggested that I should keep better notes, but what's the fun in that? My Toshiba is now working fine. 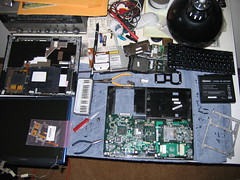 Those who read my journal will remember that my broke laptop was an excuse to buy an Asus Eee PC 1000HA 10-inch Netbook from Amazon for use if my Toshiba became a basket case. I'm writing this entry on the machine. For most things, I like it.

It's perfect and very convenient for web surfing and answering email from my recliner, but for serious writing, it has an insane keyboard. I'm unable to get used to it. The delete key is in the upper right hand corner. The right shift key is small and just outside the line up key. I frequently hit the wrong key, moving the cursor up into my writing. First of line and end of line are double key operations. Perhaps the worst is the sensitive touch pad just below the space bar where I'm used to resting my thumbs. A slight thumb brush sends the cursor and my typing to unexpected places.

I have yet to put ubuntu on the little guy. I've downloaded the XP versions of the Firefox web browser and the Thunderbird email client. That's okay for now, although I frequently get impatient with quirky XP. I guess I should be grateful I don't have to deal with Vista.

I end with pictures of Kathy's pretty blooming Amaryllis.