"The good thing about science is that it's true whether or not you believe in it." attributed to Neil deGrasse Tyson.

At a local Chinese restaurant I received these two fortunes, saved them, and re-read them this morning. I consider them very wise, and may have posted them already.

"Happiness is not a reward; it's a consequence."

I resist the temptation to elaborate. Sometimes more words serve only to clutter meaning.

Anyone who has borrowed money; house, car, card, etc. knows that you can quickly get into big trouble if your payment is less than the interest charges each period. Right? Paying interest on interest can be bad.

It can be bad for governments, too.

In fiscal year 2012, the US government's interest bill was $360 billion. It will be larger this year. In the last five months since the US Goverment fiscal year began, according to the US Treasury website , we've racked up $170 billion in interest.

To avoid future troubles and to successfully lower the National Debt, the minimum US deficit reduction each year should at least be equal to what we pay for interest. The longer we wait, the worse the situation will become. The Simpson-Bowes Commission understood this, the Republican Senator from Oklahoma, Tom Coburn understands this, and and our President understands this. That's why he endeaveres to achieve the 'grand bargain,' a deficit reduction that's larger than the yearly interest. The President proposes doing it with a mixture of expense reductions and taxes increases for the wealthy, similar to the bipartisan deficit reduction commission recommendations. He has been spectacularly unsuccessful.

Thus far, the efforts by the president have been stymied by the House Republicans. They refuse his approach without compromise. The House's counter-proposals are meager compared to the interest payment. Their proposed reductions sound grand until you realize they are quoted for a ten-year period rather than just one. The Ryan Deficit Reduction Plan is the latest House Republican proposal. This plan is mostly a raid on the Social Security and Medicare funds which are held separate from the government revenue stream and are funded by the payroll tax. Social Security and Medicare funds are solvent and will continue solvency for at least the next ten years unless the House Republicans are successful. According to Congressional Budget Office, the Ryan Deficit Reduction Plan will actually raise the National Debt by trillions over its lifetime. The Republican argue that a large National Debt can be offset by growing the economy. That argument fails when the National Debt is growing faster than the economy as it is doing now.

The the much-hyped 'fiscal cliff/sequester' only reduces the deficit by $128 billion ($85 billion reduction in government expenses + $43 billion in tax increases for the ultra-wealthy). To reach the goal of just paying the interest, we need at least $300 billion more in deficit reduction for this year. Most economists say that cutting government expenses is too austere for our fragile economy and anyway politically it just isn't going to happen. Judging from their paltry porposals, it is apparent not even the House Republicans can agree on that sharp of a cut. The President's plan to combine more expense cuts with some new revenue acquired by increasing taxes and removing tax loopholes for the ultra-wealthy is a good approach. New revenue from the ultra-rich is reasonable. The more one profits from commerce, the more one depends on and uses the US government's infrastructure and services. Also, it appears that many of them made huge amounts of money during the recent recession. It seems only fair that they should pay more now.

I can remember years ago, in the Vietnam War era, the Federal Government instituted a temporary 'tax surcharge' on wealthy Americans. Maybe that's what we need right now, a tax on the ultra-wealthy that would expire when the National Debt is paid.

Most of the National Debt accrued during our working lifetime. We're doing nothing to retire it. Do we continue that do-nothing path to leave our debt for future generations or do we act responsibly?

Some friends dropped by our home for a visit. They left a beautiful flower arrangement for us. 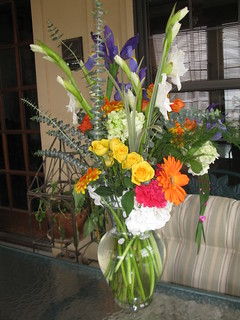 <
That was nice of them, nice to receive the flowers, but I suppose, in a way, the flowers weren't intended for us. They were flowers of sympathy for my sister Betty who passed away last Sunday evening at a hospital in Oklahoma City.

Betty suffered from stage IV colon cancer which had spread to her liver. That's pretty much end game. "Cancer has no boundaries," one of my cousin wrote in a sympathy email, and he was right. One can diet, exercise, eat and live sensibly only to be struck down by cancer.

Not that my sister did any of that.

I spent a large part of yesterday gathering facts and composing Betty's obituary, getting it ready for the funeral, which will be on Saturday. Which will be a bit different than planned due to the recent weather. My family isn't big on funerals, just a simple graveside ceremony will do. Except this time the rural western Oklahoma ancestral cemetery lies under a couple feet of snow and many of the roads in the area are still closed and power outages are rampant. We'll have this funeral inside at the chapel. Hopefully, it won't be a candlelight ceremony.

Here's her obit (properly bleeped for the Internet public):

In 1943 the family moved to Western Oklahoma and Betty attended public schools in Vici, Seiling, Camp Creek, and Camargo, graduating from high school in 1958. She attended college at Southwestern State University, Weatherford, Oklahoma and in 1962 obtained a degree in education. Betty taught in elementary schools at Braman, Elkhart, Kansas, Camargo, and Temple where she retired from teaching. After retiring, she worked at tag agencies in Coweta and Broken Arrow.

Betty touched the lives of many people and was always willing to help others. She especially loved children, her students, and she loved spending time with her family, her nieces and nephews and their children who consider Betty their beloved special grandmother. Late in life, Betty was married briefly to the late L___ G___. She cherished the time she spent with his children.

Betty was preceded in death by her parents, __ and sister Mary __. She is survived by a foster-son Jack S__, her four brothers and sisters-in-law, ____; 3 nieces, 8 nephews, 6 great-nephews and 9 great-nieces, and many, many friends."

The obituary leaves a lot unsaid. I left out the part where as a child Betty talked a slightly younger brother (me) into running away from home. The fist fights she had after school with an elementary school arch enemy. The fact that she spent many years as a driver and EMT in a volunteer ambulance crew and told a slightly gruesome tale of cleaning up remnants from a shotgun suicide. That she loved telling stories and recounting fairy tales. Several generations of children can testify to that.They can also tell you about routine Friday movie nights where she plied them with popcorn, stories and old movies while their parents had the evening off.

That she was a dust bowl brat born not far from the Ken Burns' documentary epicenter, suffered many bouts of childhood pneumonia, survived teenage polio, adult breast cancer, verbal spousal abuse, and numerous episodes of depression and anxiety. Oh yes, did I mention the two brain surgeries? No? Well, she was somewhat accident prone.

She was a good sister. I'll miss her a lot.

I've wanted a lawn sprayer for years. The sprayers I've found in stores or on the Internet are all mounted on little trailers and have two or three sprayer nozzles that are located at least two feet above the ground. Last spring, I borrowed one of these sprayer trailers from my brother-in-law and found it lacking for several reasons. Sprayer nozzles two feet above the ground combined with our normally brisk wind allowed the spray to drift to places and plants I didn't want sprayed. I also had trouble maneuvering the trailer hooked behind my riding lawn mower.

Given last spring's lawn spraying experience, I decided this year I wanted a sprayer that was mounted on my mower, not on a trailer, and a sprayer that had spray nozzles much closer to the ground. I rehabilitated an old sprayer I had retired from spraying our row of pine trees before they got too tall and before I found that bug zappers did a better job of protecting the trees from pine tip moths. I'd already set up this sprayer to ride on a hitch cargo carrier. An Internet search led me to a cheap four nozzle spray boom that I purchased from Amazon.com. I replaced all the hoses and the input check valve. Once everything was assembled, I experimented with nozzle height. I quickly concluded that the 80 degree spray tips that came with the boom were inadequate at the height I wanted, but these were easily replaced with four 140 degree deflector type tips from Atwoods. Here's a photo of my lawn spray rig and the resultant spray pattern. 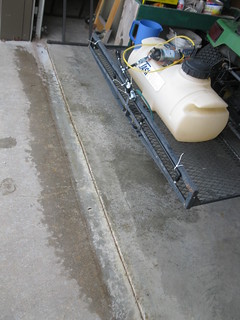 Note the nice even six foot plus spray pattern. Also note that while I was at it I mounted two hose quick disconnects to make assembly easier and to allow me to quickly add a spot sprayer to the rig.

Reading these earlier entries in order may better introduce this one: Christmas Pitstop and Christmas Snack.

At Christmas time, the man and me
Talked and plotted beside the tree.
That night a good scheme we did weave,
A poker game on New Year's Eve.
A night of cards, to greet the new,
And a big pot of Santa's stew.
( Collapse )

I feel that we (the US) are at a critical point in time. I recently wrote and gave my opinion about the National Debt and Deficit to my representatives in Washington. I encourage everyone to do the same and let your opinion be counted.

Here is what I wrote.

Thirty-three percent of Oklahoma voters voted for President Obama, a definite 33% mandate even in the so-called reddest state in the Union for his amply vocalized deficit reduction plans.

It's time the Republicans in the House and Senate stop playing politics and stop paying homage to a billionaire-funded lobbyist and join with their fellow Americans to get serious about reducing the Nation's deficit and debt and restoring our economy!"

Overheard election night on Fox News: [About Colorado] "They have a referendum on legalizing Marijuana. That's what's bringing out all the Democrats."

What do Todd Akin, Richard Mourdock, Roger Rivard, Joe Walsh, Tom Smith, and John Koster have in common? They are all ardent pro-life politicians or politician-wannabes who vocally trivialized and demeaned women suffering a pregnancy by rape. They are all Republicans, and they all lost in the recent election. There was one more, Paul Ryan, who managed to hang on to his old job.

You type and mouse, don't you? Stretch!